Are we networking or simply being sociable? 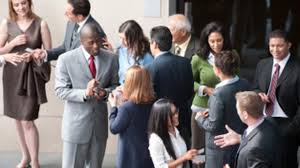 Are we networking or simply being sociable?

Have you ever arrived at a networking event and felt the confidence to talk to strangers drain from your body?

It happens to us all. In an age where it’s increasingly easier to converse across social media platforms, text or email rather than pick up the phone and actually engage with another person’s voice, we find ourselves with less opportunities to speak-up and persuade others of the benefits to doing business together. Which means, when the opportunities arise, sometimes we’re just a little out of practice.

At a recent Confidence Skills workshop I was hosting, I asked my class why they thought the basics of business networking could sometimes be so hard.

As well as all the usual answers you’d expect about introverted personality types, conversational starters, and our natural inclination to not like being sold to, one answer struck a particular chord.

The basics of business networking is sometimes hard because people confuse networking with being social.

It’s true. Industry networking should be about connecting people with others who may need their services. Being social on the other hand is radiating towards people you already know and like in order to chat.

The problem with being social at a networking event is that it encourages cliques.

Earlier this year, I attended a so called business networking event that I’d never been to before and as soon as I’d entered the room, it was apparent that no-one would make the effort to talk with me as they were perfectly happy catching up with friends and colleagues.

I likely won’t go back because I know they aren’t serious about their networking but at the time, it made me question my own confidence to speak to a room full of strangers.

So yes, it’s ok to sometimes feel less than confident about promoting your business to potential new leads but by doing so, you are forcing yourself to practice the arguably dying art of good conversation.

And yes, it’s also ok to assess the atmosphere in a room and decide that actually, this may not be the time nor place for business and a more social approach is required, which can then be followed up with a well-crafted email proposal.

Either way, the more we place ourselves in these types of conversational situations, the more confident we become. Here’s my top seven tips for keeping the conversation going…

Tips for maintaining good conversation
1. Be aware of your own body and facial language. Take care not to invade another person’s space, be physically expressive, without being excessive.
2. Don’t gossip. Keep the conversation positive and constructive.
3. Cultivate a wide range of topics. Be interested and interesting although try to steer clear of politics and religion.
4. Have a sense of humour. Enjoy yourself, but take care to avoid sexual or ethnic humour to avoid poor judgement.
5. Avoid interrupting. Take care not to let your anxiety or enthusiasm overtake a person’s story.
6. Be enthusiastic and upbeat. Use positive reinforcement where possible.
7. Be flexible in your point of view. Try and be open to seeing another’s point of view – of course it is natural to have your own opinion, but reflect these in a way that is not hostile, offensive or defensive.